WHERE DID YOU GO? I feel like Memorial Day was last week, and now fall is upon us in New England. Alas…

After Session 1 of Camp, I never really got the opportunity to write about my experience, and now I find myself home and recovering from my second and final week at Camp, Session 9. (And listening to Dashboard Confessional, but not in a depressing way. I’m actually laughing–and only Carly and Alexandra know why!) There is so much to say about Camp, and at the same time it’s hard to put into words. People always ask me,

“How do you do what you do? Aren’t you so sad all the time? It must be so hard.”

To that, I say–it is hard. There are days I come home completely emotionally and physically exhausted. I don’t want to talk to anybody, (good thing I don’t have roommates) and I’d rather just go to bed. But who doesn’t feel that way about their job at one time or another? A majority of my day is spent playing with kids whose lives are really hard, but I get to be the one that puts a smile on their face. There is so much laughter in what I do, that it more than makes up for the times there are tears. And when I have the privilege of volunteering at Camp during the summer or weekends during the year, it’s like everything is right again with the world—the “different kind of healing” Paul Newman talked about isn’t just for the kids!

I volunteered for two completely different sessions this summer. Session 1 my entire cabin was from Italy—7 precious Italian girls who spoke very little English. Luckily they came with a translator. The coolest part about this week was realizing there are no love language barriers at Camp. Obviously, I speak no Italian, but these kids still “get” Camp, even if we’re just singing “Ice Cream and Cake” or yelling the ONLY unit cheer they memorized in English for the millionth time. I’ll never forget them telling me through tears and in broken English how much they would miss me telling them to brush their teeth every night as they loaded up on the bus at the end of the week. Camp is so amazing because these kids get to leave their illness at the gate and just be kids. And they get to be kids with other kids who get what their lives are like everyday. They are smothered with the Safety, Respect and Love that aren’t always present in the real world—whether from their peers, family situations or just the reality of their illness.

Session 9 is for well siblings of campers who attend throughout the summer. I was lucky enough to have a cabin of 9 senior campers who shared their final summer of Camp with me. These girls are incredible, and I can’t imagine my life not having known them. Session 9 is especially cool because as Matty, our camp director, put it, “We have the cure they need!” I don’t have the ability to cure HIV or sickle cell disease, and I can’t make chemo suck less, but for well siblings I have the ability to build them up and empower them to see themselves as much more than “so and so with such and such disease’s brother or sister”. I wish I could post some of the pictures from these weeks, but HIPAA says no. Instead I can share pictures of me covered in all kinds of ooey gooey mess…because that’s what happens at Camp.

On the way to Carnivarty from the Paint War.

By the time the kids leave, you’re so tired, not only from the lack of sleep, but because you’ve given of yourself completely. (I have so much respect for the full time summer staff that does this for 9 WEEKS!! They are an amazing group of people.) Although both my cabins were completely different in every sense of the word, at the end of each week I had a deep desire to just hold each of my campers and somehow express to them how special they were. In a “you is kind, you is smart and you is important” kind of way, I wanted to protect them from all the bad things in the world and keep them in the safe bubble of Camp!

Today at work, I received this card in the mail from one of my campers. Never underestimate the impact you have on another person’s life and never take for the granted the love that is reciprocated. I feel truly blessed every day for the opportunities God has given me! 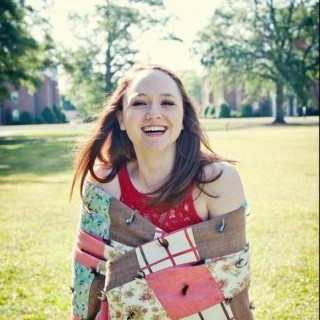